Last post, Race Car was sanded, primed, and painted. Now, it’s time to add a little oomph to his vroom.

First up, he needed some mirrors. Cars can’t speed down the track way ahead of their competition if he can’t see where his opponents  are.

On! I bet Race Car will be saying “See ya later!” to all the other race cars on the track as he vrooms toward the finish line.

A nice fresh coat of paint on his windshield and chassis! 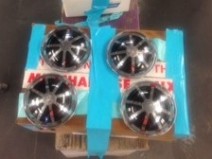 No race car is complete without a super cool spoiler!!

And for the little ones to  be able to sit nice and comfy on him, Race Car’s pit crew at Tony’s Restoration & Collision Repairs had his seat re-covered in a nice genuine leather.

Keep your engines idling, because Race Car’s decals are next and you won’t want to miss that!

Thanks again to Tony and Crystal and all of Race Car’s pit crew at Tony’s Restoration & Collision Repairs for adding tons of oomph to Race Car’s vroom and for getting him one step closer to being a real RACE CAR DREAMS!